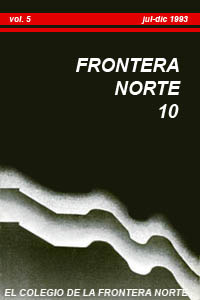 While recognizing the Important links between human rights, labor, and agricultural groups and environmentalists and the complexity of the problems presented by the NAFTA, this article focuses on the role and concerns of non-governmental organizations along the U.S./Mexico border whose orientation is primarily environmental.

So-called "fast track" legislation requires that the U.S. Congress either approve or disapprove the NAFTA package. Still unclear is the possibility of additional alterations in the final agreement, through implementing legislation or other means.

Founded in 1970 and formalized as an Asociación Civil in 1974, Bioconservación, A.C. is one of Mexico's oldest non-governmental environmental organizations. Bioconservación began as a biological resource conservation group, integrated family planning into its agenda during the 1970s, and with the industrialization of the border has increasingly worked to address negative impacts of uncontrolled economic growth.

Keith Schneider, "Environmentalists Fight Each Other Over Trade Accord," New York Times, September 16, 1993.

Interview with Laura Durazo, Proyecto Fronterizo de Educación Ambiental, September 7, 1993. Other Tijuana-based environmental groups, such as Foro Ecologista, AIRE SANO and Movimiento Ecologista de Baja California (MEBAC), have been active in local and regional environmental issues, but none has taken a stance directly on the NAFTA.

Ironically, many Mexican NGOs have found it easier to gain access to the U.S. policy-making process than to Mexico's. Mexican border environmentalists have been active in U.S. state and federal briefings, and testified at U.S. Congressional hearings on the NAFTA's potential impact in Mexico.

Interview with Laura Durazo, Proyecto Fronterizo de Educación Ambiental, A.C., September 7, 1993. Evidently, some PIAF funds helped provide trees and initiate a Cañón del Padre study in the early stages of the plan, but there is no evidence of PIAF funding going to Tijuana since Spring 1992, when SEDUE merged with SEDESOL.

Besides the North American Free Trade Agreement and its parallel environmental side agreements, other plans include the EPA/SEDUE Integrated Border Environmental Plan/Plan Integral Ambiental Fronterizo and the 1991 Bush "Action Plan."

For a more detailed analysis of border proposals, see Stephen Mumme, "New Directions in U.S./Mexico Transboundary Environmental Management: A Critique of Current Proposals," Natural Resources Journal, vol. 32, Summer 1992. Universities and research centers along the border also played an important role in the development of policy recommendations for institutional reform of transboundary environmental regimes, including the University of Arizona, the Univertisy of Texas, Austin, and the University of Texas, El Paso.

Mary Kelly, "Facing Reality: The Need for Fundamental Change in Protecting the Environment Along the U.S. /Mexico Border," 1991.

For a more detailed description of the proposed FEPA, see Alan Neff, "Not in Their Backyards, Either: A Proposal for a Foreign Environmental Practices Act," Ecology Law Quarterly, Vol. 17:477, 1990.

Michael Gregory and Dick Kamp, Letter to Bill Pistor regarding recommendations on NAFTA draft text on the environment, August 31, 1992.