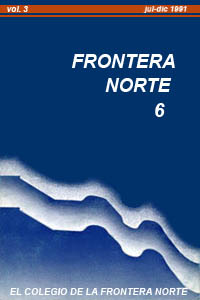 Robert Cuff and J. L. Granatstein, Ties that Bind: Canadian-American Relations in Wartime from the Great War to the Cold War (Toronto, 1977).

Lorraine Eden and Maureen Appel Molot, "The View from the Spokes: Canada and Mexico Face the US", in S.J. Randall, H. Konrad and S. Silverman, The Challenge of North American Integration (Calgary: University of Calgary Press, in press).

A number of individuals, including the author of this paper, were invited to make written submissions. For the hearings themselves, see Minutes of Proceedings and Evidence of the Standing Committee on External Affairs and International Trade Pursuant to Standing Order 108 (2), an encamination of Canada-U.S. -Mexico trade Negotiations (Ottawa: 1990).

Eden and Molot, "From Silent Integration to Strategic Alliance: The Political Economy of North American Free Trade", Presented at the annual meetings of the International Studies Association, Vancouver, B.C., March 22-24, 1991.