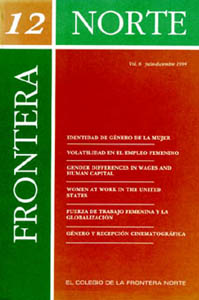 Gerth and Mills' interpretation of this sociological construction is that "Weber's interest in world-wide comparisons led him to consider extreme and 'pure cases.' These cases became 'crucial instances' and controlled the level of abstraction that he used in connection with any particular problem. The real meat of history would usually fall in between such extreme types; hence Weber would approximate the multiplicity of specific historical situations by bringing various type concepts to bear upon the specific case under his focus." H. H. Gerth and C. W. Mills, From Max Weber. Essays in Sociology (New York: Oxford University Press, 1958, pp. 59-60).

It should also be pointed out that men's labor force participation rates have declined since the 1950s--although interestingly this decline seems to have bottomed-out during the second half of the 1980s. See Juliet B. Schor, The Overworked American: The Unexpected Decline of Leisure (New York: Basic Books, 1991)

This in contrast to the widely held view that capital merely seeks the cheapest labor that it can find. In reality, firms seek low labor costs, but they must balance this against other variables, such as skill levels, factory socialization, transportation and production infraestructure, location relative to markets and resources, and availability of suppliers and subcontractors.

All data utilized in this section of the analysis are to be found in Theresa J. Devine, "Characteristics of Self-employed Women in the United States," Monthly Labor Review, March 1994.

Many women preferred working under the new factory system, since they disliked domestic work and farm work was much too hard. Employers, on the other hand, preferred this new labor force because its rural origins meant it would accept low wages and that it lacked a labor rights ideology, such that: "...the new corporations looked to obtain workers not paying sufficient wages to draw males away from their occupations (form which they might also bring ideas about workers' prerequisites and rights), but to attract a less skilled workforce of rural female labor. Domestic service, the only widely available alternative employment paying wages, was repugnant to many women because of its subservient nature. Farm life had taught them how to work hard and not fear hard work. If they could be attracted, they could do the work." Laurence F. Gross, The Course of Industrial Decline. The Boott Cotton Mills of Lowell, Massachusetts, 1835-1955. Baltimore. Johns Hopkins University Press, 1993, p. 9.

All data appearing in this section of the analysis appear in William G. Deming, "Work at Home: Data from the CPS," Monthly Labor Review, February 1994.

There are a number of difficulties with the identification of these occupations, since the definition of what "childcare" means may be left to the interpretation of the census taker or of the respondent. In any case, it would appear that both of these occupations do not require a great deal of specialization although they may be technical in nature.